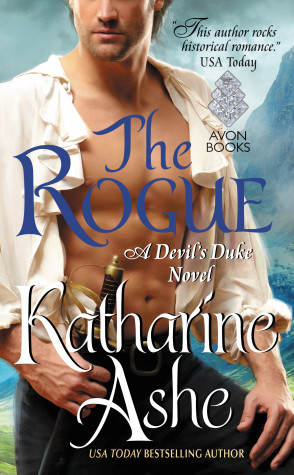 In the first book in Katharine Ashe’s stunning new historical series, to capture a duke, a lady must first seduce a rogue.

Lady Constance Read is independent, beautiful, and in need of a husband-now. The last man on earth she wants is the rogue who broke her heart six years ago, never mind that his kisses are scorching hot…

Evan Saint-André Sterling is rich, scarred, and finished with women-forever. He’s not about to lose his head over the bewitching beauty who once turned his life upside down.

But Constance needs a warrior, and Saint is the perfect man for the job. Only as a married woman can she penetrate Scotland’s most notorious secret society and bring a diabolical duke to justice. When Constance and Saint become allies-and passionate lovers-he’ll risk everything to protect the only woman he has ever loved.

Author of The Rogue Katherine Ashe talks about Devils due series, the rogues character and more!

Q: Your new Devil’s Duke series kicks off with a bang in The Rogue; there’s plenty of intrigue, action, and some cameos from Falcon Club members of your previous novels. Yet you’re also telling a very deep love story that touches on many issues, including second chances, abuse, and honesty. As a writer—and as a reader!—what appeals to you about mixing “spy stuff” and adventure with the kind of intensely emotional narrative going on in The Rogue?

A: Truth? I want to be completely swept away. I love getting so immersed in a story that I can’t put it down. I am totally addicted to intense, deep, powerful romance. When I read and write, I want to experience every emotion: I want to laugh, weep, shout, feel my heart racing, and go a little insane-in-love right along with the hero and heroine. If they’re opponents or allies in exciting intrigue—Saint and Constance are both in The Rogue—I get completely caught up in the excitement. It’s romance, so I know they’ll be together by the end. But the more intense the journey to falling in love is, the more I adore it.:

Q: You write historical romance novels—but you’re also a professor of history! How much does your academic work as a professor overlap with your writing?

A: Now that I teach popular fiction — both romance fiction and other fiction based on medieval history — I can pour my experience with researching, writing and publishing novels into my teaching. And it goes the other way too; teaching nourishes me. I learn from my students all the time. Also, oftentimes I’ll read something to use in class and it will inspire a character or scene or even an entire plot of a novel.

Q: The title of the novel, The Rogue, refers to Saint, our roguish hero. But he’s not the only one known to break the rules every now and again: Constance is an extremely independent woman. At every turn, she refuses to let society make her dependent on someone else, and she continually rises against every challenge she is faced with. What inspired you to write such a strong, forward-thinking heroine?

A: Constance is incredibly strong and independent, but she’s also damaged and vulnerable. In a world dominated by men who want to use or control her, she’s come to a place where she’s simply refusing that. She wants to make her own decisions, and she wants to be her own hero (it’s why she asks Saint to teach her how to fight with a sword and dagger). But she wants—and needs—love too. I think this is the struggle of modern women: to be independent and take care of themselves, as well as others who need them, but also to allow themselves to be loved by a good man—a man who won’t try to control them, but will love them for the entire woman that they are.

Q:You often speak at conferences and give interviews regarding your views on the romance genre. We’ve seen romance get more time in the mainstream media spotlight this year than ever before—do you think that’s an indicator of things to come? Where do you see the genre going from here?

A: The good press is wonderful! It’s a good sign for the future. We’ve a long way to go, though. I think the new openness to romance fiction in the mainstream media has as much to do with the fabulous novels authors are writing now, featuring independent heroines with real agency, as it has to do with our society very, very slowly shifting toward an honest recognition of the latent misogyny and anti-feminist biases in our culture. These biases are so deeply rooted (they’re thousands of years old!) that it’s going to take more than few decades for real equality. When the romance genre is treated the same way that the mystery or sci-fi or thriller genres are treated, that’ll be a good indicator we’ve come to true equality between the sexes.

Q: Tell us a little bit about your upcoming projects!

A: The Earl is next! Through several books my readers have been following the heated banter of Peregrine, the secretary of the Falcon Club, and popular London pamphleteer Lady Justice. She has skewered him again and again in the public press for being an idle elitist, but now she needs his help. They’re thrown together in an unexpected (and dangerous) adventure across the Scottish Highlands. It’s a super intense, funny and exciting love story, and I cried and laughed and gasped and sighed and loved loved loved writing it.

After that, the duke everybody’s calling The Devil gets his story!

Rafflecopter Giveaway (a Paperback bundle of the four titles that feature the Falcon Club and the hero of this title. This includes: WHEN A SCOT LOVES A LADY, HOW TO BE A PROPER LADY, HOW A LADY WEDS A ROGUE, I LOVED A ROGUE (US Only))
a Rafflecopter giveaway

Katharine Ashe is the award-winning author of historical romances that reviewers call “intensely lush” and “sensationally intelligent,” including How to Be a Proper Lady, an Amazon Editors’ Choice for the 10 Best Books of the Year in Romance, and My Lady, My Lord and How to Marry a Highlander, 2015 and 2014 finalists for the prestigious RITA® Award of the Romance Writers of America. Her books are recommended by Publishers Weekly, Women’s World Magazine, Booklist, Library Journal, Kirkus Reviews, Barnes & Noble, and many others, and translated into languages across the world.

Katharine lives in the wonderfully warm Southeast with her beloved husband, son, dog, and a garden she likes to call romantic rather than unkempt. A professor of European History, she writes fiction because she thinks modern readers deserve grand adventures and breathtaking sensuality too. For more about Katharine’s books, please visit www.KatharineAshe.com or write to her at PO Box 51702, Durham, NC 27717.