We are super excited to share the Cover Reveal of the upcoming Whitney G. novel!

BREAK UP WITH HIM, FOR ME by Whitney G.
Releasing in June 2020 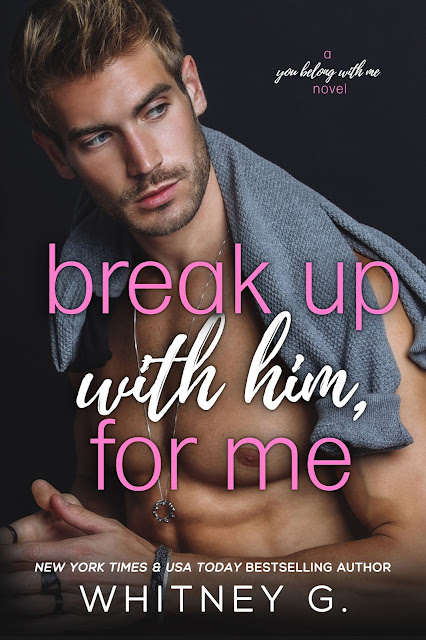 Please leave your message at the sound of the beep…
Penelope, I know that it’s three o’clock in the morning, but I have to get this off my chest.
I can’t give you any more advice on landing this other guy, can’t tell you another “sexy” thing that you should do, or suggest a new set of filthy words that you should text him late at night.
As your best friend, I’ve reached my limit, and I can honestly say that he doesn’t deserve you.
I’m not saying all of this because I’m f-cking jealous, or because he had the audacity to say that he makes more money than me. (I still can’t find his name on the Forbes 500 list, and I know damn well that he’s renting that Ferrari, but that’s a story for a different day.)
He’s not who you think he is, and the better man has always been right in front of you…
You have every reason to never give me a chance since you know me better than anyone, and you agree with all the tabloids calling me “The Cocky King of New York,” and the “Untamed Playboy of Manhattan.” But I honestly believe that you’re better off with someone else, and I need you to see.
I’m not asking for too much…I just want you to break up with him, for me.

Whitney G. is a twenty-eight-year-old optimist who is obsessed with travel, tea, and great coffee. She’s also a New York Times & USA Today bestselling author of several contemporary novels, and the cofounder of The Indie Tea–an inspirational blog for indie romance authors.

When she’s not chatting with readers on her Facebook Page, you can find her on her website at http://www.whitneygbooks.com or on instagram: @whitneyg.author. (If she’s not in either of those places, she’s probably locked away working on another crazy story.)

Cover Reveal: Never Got Over You by Whitney G.