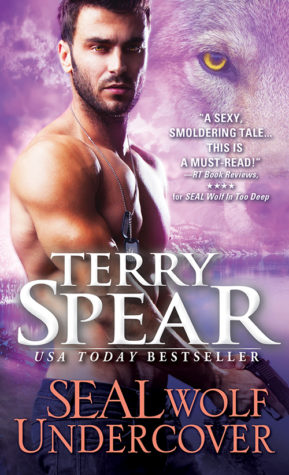 No wolf is safe in USA Today bestseller Terry Spear's new installment of the SEAL Wolf series.
Never be so foolish as to fall for the enemy...Special wolf agent Jillian Matthews has joined the jaguar-run United Shifter Force to track down a deadly criminal. She's even willing to work with PI Vaughn Greystroke―until the hot, growly SEAL wolf makes the mistake of getting in her way. Naturally, she shoots him. Who could blame her?
Vaughn Greystroke has always worked alone. But when a string of attempted murders puts him in the crosshairs, teaming up with the Shifter Force begins to sound like a good idea. Even if he has to work with alluring―and potentially treacherous―Jillian Matthews. Vaughn is a trained SEAL, after all. He can surely keep his distance from Jillian...no matter how much she's getting under his skin.

Sometimes, I’ll write without any music or sound whatsoever. But lately, I’ve been listening to music scores. It feels like I’m writing movie scenes then, with the music providing the rich, cinematic backdrop.

With that said, my favorite music can be anything fantasy and thriller or adventure-related. Slow or whimsical pieces don’t work. It doesn’t have the right tempo or tone then. For the most part, no vocals, just instrumentals, though some of my soundtracks have vocals in a different language and that’s fine. As long as I don’t recognize words and type them into my manuscript! Some I’ve heard so many times, I don’t really hear the words any longer.

I don’t have to listen to historical music to write historical books either. Or contemporary to write the shifter series. The music I listen to ranges anywhere from Game of Thrones and movie soundtracks to The Thirteenth Warrior, Bourne Identity, Celtic music, Alexander, Titanic, and tons of other CDs. I’ve started to listen to Amazon Prime Music when I’m on my laptop to find new movie soundtracks so I don’t feel the music is the same old thing after a while.

Sometimes, I’ll hear the music at some future date and it will make me “relive” the scene I wrote while listening to that particular piece.

In the spring, summer, and fall, I have the fan on, since it’s Texas hot here and that helps to keep it cooler, but it also reminds me of a summer’s breeze as if I were out running with the wolves.

It’s summer, 94 degrees and 76% humidity, but guess what I’m working on now. Billionaire Wolf Christmas. How do I get in the Christmas mood when it’s soooo hot here? I could go to the stores. They’re getting Christmas decorations in already! Watch cold-weather movies, Christmas stories, turn the AC down, play Christmas songs, look at winter scenes, bake Christmas cookies, burn cinnamon candles, just anything to get me in the right frame of mind.

What about writing for a fall scene? It comes really late here and we don’t have the beautiful fall colors. So back to pictures, movies that show great fall scenes, and enjoying all the fall stuff at the stores, helps to give me a taste of autumn.

I’m usually writing about summer when it’s winter. You’d think I’d write a Christmas book in winter, right? But deadlines don’t work that way. When I was writing for romance magazines, I always had to write out of season.

That’s what having an imagination is all about. In our world, in their world.

What about writing about being in the jungle, on an island, in the forests, or at the beach? Movies and Youtube videos, and bloggers’ trip reports help to set the scene, because, though I’ve visited a lot of the places featured in my books, I can’t be there while I’m writing the stories. Darn.

So I have to research settings and weather, and that can be fun. I’m watching a movie right now where the main character is finding mythological treasures, and one of the sites he’s at are the most beautiful waterfalls in Thailand, and the hero and heroine are ziplining across the jungle. Wow, what a perfect place to put the jaguar shifters.

Ironically, after I’d written Flight of the White Wolf, I watched a movie about a couple paddling in the Boundary Water Canoe Area, which confirmed what I’d written was accurate, but it was fun seeing them actually paddling in the half-frozen waters. Great visuals to go along with the pictures I’d seen, trip reports I’d read, and my friend’s experiences while her family paddles there.

For SEAL Wolf Undercover, I “returned” to Oregon and the forest there. I had attended college in Portland, Oregon, did lots of hiking in the forests and along the coast, so for me, it’s a special place to set my stories. It was the perfect story for action-adventure music and with that turned on, pictures of Oregon before me, I wrote the story.

Now, it’s time to turn on the music, burn some candles, and do a little “Christmas shopping.” I’m off to write Billionaire Wolf Christmas next!

Excerpt: Dreaming of a White Wolf Christmas by Terry Spear