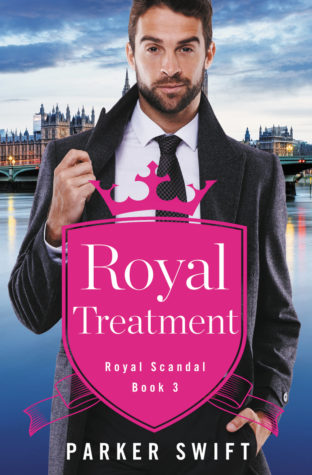 All this duke needs is his duchess…

For five blissful months I've been engaged to Dylan Hale, the most handsome, commanding, and wickedly sexy duke in England. For five months I've woken up next to the man I love, indulged in secret trysts, and submitted to every delicious desire. Even better? We've managed to keep it hidden from everyone. That means no paparazzi scandals, no snide comments from Dylan's mother, and no harsh public scrutiny. It's been heaven, but with Dylan's royal responsibilities looming, our time alone is running out. And while I can't wait to be Dylan's wife, I'm terrified that becoming Dylan's duchess might mean losing myself.

For the past five months, I’d taken my mission to heart: Put yourself first. Enjoy the freedom of life out of the spotlight. Get your career off the ground before it competes with running an ancient estate and being on your husband’s arm.
For five months, I’d said yes to all things. Late nights dancing with Fiona and Josh. Girlie nights with Emily. Paris for Fashion Week. Long runs in the park by myself without paparazzi trailing me. Late nights working on the launch of Fiona’s online store. Dylan and I had kept our relationship low profile so that I could do all those things, so I wouldn’t get sucked into the aristocratic machine, so I could move freely and make choices without fear of how it would look or who would be watching. And it had been great. It did feel freeing, like I’d been slipping into a version of adulthood I’d always been waiting for, figuring out who I wanted to be in the world, taking a deep breath while I thought about the reality of being a duchess. But no matter what I did, I was always happy to go home to Dylan, to find him there, to let him find me there. Nothing had changed in that regard—I wanted to be with him.
I had figured I’d wake up one day and just know, now’s the time. And on that day I’d replace soon with yes. We’d make a big announcement, open the door, I’d officially be Dylan’s fiancée and soon after his wife, with everything that came with it. But that aha moment hadn’t happened yet, and now there was this. This decision, going to New York for six months, would change everything. If I said no to Hannah’s offer and stayed in London, I knew that, in some plates-shifting kind of way, it meant that I was ready to say yes to Dylan, to all of this, to everything he was asking for. But if I said yes to Hannah, to effectively leaving behind everything I’d built in London for a half a year in New York, my long engagement would be longer than I’d ever really wanted it to be.
With each block I passed through, my mind changed, I swayed back and forth. Yes, I’d go to New York for six months. No, I’d stay in London with Dylan. Yes. No. Yes. No. It felt like everything was pitted against one another. London versus New York. My career versus my relationship. My present versus my future.
I was swimming so feverishly in my own mind, my heels clacking on the pavement, my bag swinging against my hip, that didn’t realize I was standing in front of our house.
Our house.
I hadn’t walked to the store. I’d walked home.
As I looked in the window, I could see Dylan in the library on the ground floor. It looked like he was searching for a book, his arm stretched up to one of the higher shelves. He’d been working on a restoration recently and had been researching like a madman. He was wearing jeans and a T-shirt that fitted his muscular frame perfectly. His hair was tousled, uneven from running his fingers through it. He looked at the book in his hands and then stared into the room, thinking. I knew that in a moment he would begin absent-mindedly spinning the pencil in his hand, tapping it against his shoulder, deep in thought. I knew, without looking, that his feet would be bare. I knew there was probably a half-consumed cup of tea on a stool by his drafting table. I knew him.
The beauty I saw when I looked through that window made my chest tighten. I was looking into a home that had become mine, ours. I was looking at my future.

Enter to win 1 of 15 free ebook downloads of Royal Treatment!
a Rafflecopter giveaway

Parker Swift grew up in Providence, Rhode Island, and then grew up again in New York, London, and Minneapolis and currently lives in Connecticut. She has spent most of her adult life examining romantic relationships in an academic lab as a professor of social psychology. Now, she’s exploring the romantic lives of her fictional characters in the pages of her books. When she’s not writing, she spends her time with her bearded nautical husband and being told not to sing along to pop music in the car by her two sons.