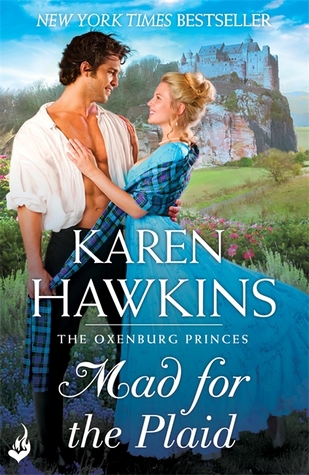 Nikolai Romanovin, a royal prince of Oxenburg, has travelled to the deepest wilds of Scotland to rescue his grandmother the Grand Duchess, who was abducted while visiting an old friend in the Highlands. Wanting to avoid an international incident, Nik plans to quietly slip into enemy territory disguised as a groom at Castle Cromartie. But his plans go awry when he falls under the cool gray gaze of the laird's daughter.
Pragmatic and clever, Mairi MacKenzie has been left in charge of the family estate and her unruly grandmother in her father's absence. Something about the new groom catches her eyes, and makes her think he's not who he pretends to be - and even more shockingly, stirs her senses. Is it his obviously educated manners? His arrogant, non-servant-like presence? It's certainly not his towering, powerful form, or slumberous, inviting green eyes!
After confronting the imposter and learning the truth, Mairi agrees to help Nik - for she, too, understands difficult relatives and would do anything for family. Soon their secret partnership leads to growing respect, searing kisses, and then something far more perilous. And when their quest turns dangerous, Mairi and Nik must discover this unknown enemy while facing the dangerous demands of their own unruly hearts.

I really enjoyed this one!

Lady Alisa MacKenize is the Lard of the Castle Loed. After all her father is too busy with politics and her sisters married off with her loving grandmother to keep her company manages the castle and the people.

Prince Nikolai of Oxenburg is not what he seems. He wears a mask, cloaks himself in whatever character he feels is required to get him what he wants. He doesn’t trust easily and hides his true self from almost everyone.

They meet on a mission to rescue Niks grandmother and another. Both of who were Alisa’s guest when they got kidnapped. Nik’s grandmother happens to be a bit of troublemaker (she was a quite enjoyable character) and when news of his grandmother missing reaches Nik, he decides to disguise himself and visit Alisa to rescue his grandmother, he didn’t count on Alisa’s attractiveness nor he refusal to stay at the castle and let him search.

Alisa and Nik do not get along at first of course they are both attracted to each other but also find each other infuriating. Alisa was a lovely heroine; strong, loving and take charge, a quality I adored of hers. The journey to rescue Nik’s grandmother brings them close, they see each other in a new light and end up falling in love.

Quibbles: After the rescue everything just kind of happened or was told it happened and it left out a lot of development that could have happened for Nik. Hence why I didn’t quite like the ending especially because if it had been left upto Nik he would still dragged his feet. I was slightly disappointment by that he didn’t get to properly apologise or woo her back,

Apart from that it was quite enjoyable and the secondary characters were also done well but most of the focus was on Nik and Alisa which I liked but I did like Tata Natasha’s mission to find wives for bachelors from the nobility. I’d read that series 😛 Also looking forward to read the Caught by the Scot, from the preview at the back of this it looks like a pretty good marriage for connivence book with a dash of unrequited young love.

Final Verdict, an enjoyable historical romance with a outstanding heroine!