What happens when the Gentleman of Rock decides to play dirty?

A drummer for the hottest rock band on the planet, David has a single, powerful weakness: Thea, the band’s publicist and the woman who steals his breath away with her every move.

Only problem is, Thea doesn’t date clients–or musicians. Emotionally scarred by a cheating ex, she’s not about to risk her heart with a man who has groupies buzzing around him like flies. Even if his sexy smile ties her up in knots.

What she doesn’t know is that David is a one-woman man…and he’s madly in love with her. David’s determined to prove he’s worth the risk, and willing to court her, step by exquisite step. Thea’s about to discover just how long and hard this handsome drummer can play.

This is the second book in the NA contemporary Rock kiss series by Nalini Singh. The series follows the stories of the band mates from the rock band Schoolboy Choir. This is David’s and Thea’s story and follows the events from the previous book.

David is the drummer of the band. He is said to be the gentleman of the band. He is also shy because of his childhood and prefers to be quite unlike the rest of his band members which makes him more attractive in the eyes of the fans. He was a sweetheart.

Thea is the publicist of the band. Thea is the half-sister of Molly (the heroine of the last book Rock addiction). She had recently gone through a bad breakup and hence is a bit apprehensive about trusting men and getting in a relationship. I really liked her, she was a strong heroine.

David and Thea’s story falls into friends to lovers trope. They had known each ever since Thea become the publicist for the band and are good friends. David has had a crush on her since the beginning which later become love but since she was engaged to someone else, he never said a thing. In the prologue, we see how David asks her out and she refuses which breaks his heart but we also that Thea though she refused was also attracted to David. So after talking to Thea’s sister and taking her advice he decides to peruse Thea; make her see that he is the right man for her. 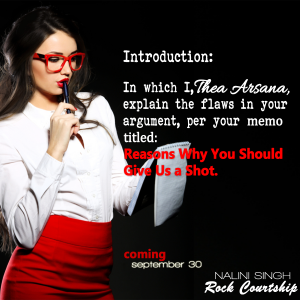 Minor quibble: I did think the plot device towards the end could have been skipped, though it did show that Thea would fight for their relationship I just felt the book would have been good without it.

I really liked their relationship and it was very much a courtship as the name of the book suggests since they are not together till after 40% of the book.Before that they communicate through phone, mail and memo’s. Their book and romance is sweet, leaves you with a big smile and a happy sigh. The book makes for a perfect cozy winter book where you can just get lost in their story. I enjoyed this a lot. Looking forward to reading the next book in the series. Happy reading!

Have you read Nalini Singh’s Rock Courtship ? What did you think of it, let me know in the comments section below.