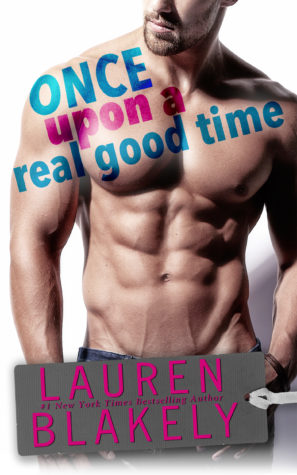 Once Upon A Real Good Time by Lauren Blakely
on 10th September 2018
Genres: Contemporary Romance, Romantic Comedy
Pages: 218
Format: eARC
Source: the Author
Buy on Amazon US, Buy on Amazon UK, Buy on Kobo, Buy on itunes, Buy on B&N

From #1 New York Times bestseller Lauren Blakely comes a sexy new standalone rom-com! That smoking hot one-night stand with a former rock star? Turns out he's my son's new music teacher. Oops. But I didn't know that the night I met Campbell. All I knew was he played my body the same way he played a guitar — like he owned it.
My libido is still high-fiving me after being self-served for too many years, and we’re both ready for another night or two of fun, especially since we don’t just have chemistry in bed — we connect over everything.
That is, until I learn he’s the man who’ll be coming to my house twice a week to teach my son — the best music lessons money can buy.
Time to turn down the volume on our shenanigans. Only that’s easier said than done.
***
I can rock a guitar solo in front of thousands, I can write chart-topping tunes, and I can absolutely stop thinking about my student’s mother naked.
After all, I’m a single parent too, and I know what it’s like to put your kid first. That’s what I do every damn day.
Trouble is, now that I’ve had Mackenzie, it’s hard — and I do mean hard — to stop wanting her. Harder too when I get to know her, and learn she’s an awesome mom, a great friend, and, oh yeah, she happens to get along perfectly with my daughter.
All we have to do is set some rules. No dating, no nookie when the kids are around, and no one gets hurt.
It’s all working out beautifully. Until we start breaking the rules, one by one.
Making music with her in the bedroom is easy. But will we be more than just a real good time when the music stops?


Mackenzie is a single mother who loves trivia at one of her non mom nights and does trivias at a local pub where she meets a musician ‘guitar hero’ as she thinks of him.

Campbell was a teen idol when he used to perform with his brothers as a trio called heartbreakers. Now he’s music teacher and does gigs with his band made up of his friends at The Grouchy Owl.

Mackenzie and Campbell hit it off from the moment they talk. They had such fun and cute banter. They are both single parents who adore their children. Mackenzie and Campbell were so cute and adorable together! I mean yes they had very passionate moments as well but the entire I thought about how cute they were!!

This is such a feel good romance, it has little angst but its minor but I adored them together. They just fit each other perfectly! They were sweethearts who deserved their HEA, after sacrificing so much for their kids.  Theres the sneaking around, tiny forbidden element and the longing for each other that a bit of angst and spice to their romance and makes the story more special.

I also really liked their kids and both their relationships with them, its nice to read for once about their kids that just nice and don’t have an attitude or any other problem.

Overall, a light hearted romance comedy with a adorable couple to makes you feel warm and fuzzy! I can’t wait to read Campbell’s brother, Miller and his best friends story!!

I’m not checking him out.

I am solely focused on answering the next trivia question. The game emcee spouts it out for the four teams vying for the prize at The Grouchy Owl bar. The prize being bragging rights.

The hostess clears her throat, brings the mic to her mouth, and asks the question: “Which Las Vegas hotel did the bachelor party stay at—”

“So easy,” I say to Roxy as she smacks my palm and mouths ringer while filling in the answer.

I’m not a ringer.

I was simply fed a steady diet of Trivial Pursuit, trivia books, and endless facts about the world as a kid.

Also, I love trivia. Trivia helped me through some tough times as an adult, and by tough, I mean anxiety-ridden, sleepless, and stressful. That kind of tough.

As the hostess flips her cards to the next question, the guy on stage—the one I’m not at all checking out—adjusts the amp for his guitar. The Grouchy Owl has a little bit of everything—from darts, to pub quizzes, to pool, to live music from local bands. It’s like a Vegas hotel right here in the West Village. Big Ike doesn’t want patrons to leave, so she makes sure the entertainment options are plentiful.

And if that handsome hottie stays on the stage, I won’t want to head home for a long, long time. Except that I’ll have to. I’m Cinderella, and I turn into a pumpkin in minutes.

But for now…Hello, nice view.

As the guy turns the knob on the amp, his brown hair flops over his eyes. He flicks it off his forehead with a quick snap then runs his fingers down the strings on his guitar. Those fingers fly.

I bet they’d fly other places too. The Heartbreakers is a series of standalone rom-coms and will be narrated by Sebastian York and Andi Arndt!
Grab your copy of ONCE UPON A REAL GOOD TIME today!
https://adbl.co/2nSLcp7