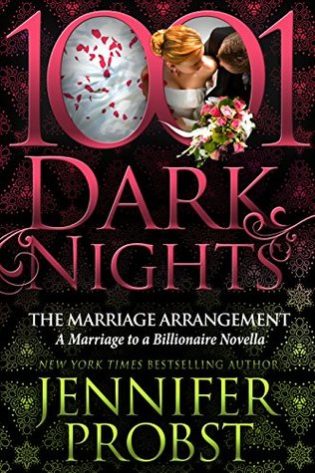 The Marriage Arrangement by Jennifer Probst
on 1st May 2018
Genres: Contemporary Romance
Pages: 125
Format: eARC
Source: the publisher
Buy on Amazon US, Buy on Amazon UK

From New York Times and USA Today bestselling author Jennifer Probst comes a new story in her Marriage to a Billionaire series. The Book of Spells returns in this sparkling addition to the series!

She had run from her demons…

Caterina Victoria Windsor fled her family winery after a humiliating broken engagement, and spent the past year in Italy rebuilding her world. But when Ripley Savage shows up with a plan to bring her back home, and an outrageous demand for her to marry him, she has no choice but to return to face her past. But when simple attraction begins to run deeper, Cat has to decide if she’s strong enough to trust again…and strong enough to stay…

He vowed to bring her back home to be his wife…

Rip Savage saved Windsor Winery, but the only way to make it truly his is to marry into the family. He’s not about to walk away from the only thing he’s ever wanted, even if he has to tame the spoiled brat who left her legacy and her father behind without a care. When he convinces her to agree to a marriage arrangement and return home, he never counted on the fierce sexual attraction between them to grow into something more. But when deeper emotions emerge, Rip has to fight for something he wants even more than Winsor Winery: his future wife.

Caterina Windsor left her home and her family winery after finding out her fiancé was cheating on her. She moved to Italy because she no longer knew who she was or what she wanted. Rip Savage worked ass of for the Windsor Winery just to find out that he’d have to marry a woman who left her responsibilities and her family is a shock to him.

The first few chapters even though I was constantly saying to Rip in my head, “tell her the truth” were beautiful. They were very romantic and sweet and you couldn’t help but love them together because despite himself Rip finds himself really falling for this woman who was nothing like he’d imagined. BUT who doesn’t know who he really is.

Regardless of minor issues I did enjoy the romance, the chemistry they had and Jennifer Probst did a great job of making us understand where the characters were coming from. The plot did work quite well but just a few tweaks in some areas would have made it even more enjoyable.

Quibbles: View Spoiler »The age of Rip was a bit questionable, if he was a bit younger parts of the story would have made a bit more sense but as it was. It just made question what he’d been doing in the past that wasn’t mentioned in the book. I mean I’ve already talked about this in one of my posts but if someone going to make a blunder, I’d need grovelling to make it better. And the book takes over a few short period of time which makes me slightly question their feelings.  « Hide Spoiler

Overall: It’s a pretty quick read with great romance, chemistry and love between the characters to make you get your own book of spells.

Jennifer Probst wrote her first book at twelve years old. She bound it in a folder, read it to her classmates, and hasn’t stopped writing since. She took a short hiatus to get married, get pregnant, buy a house, get pregnant again, pursue a master’s in English Literature, and rescue two shelter dogs. Now she is writing again.

She makes her home in Upstate New York with the whole crew. Her sons keep her active, stressed, joyous, and sad her house will never be truly clean.

Review: All or Nothing by Jennifer Probst