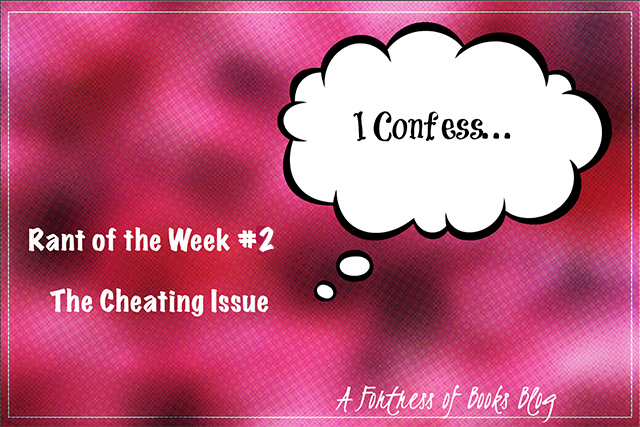 Welcome to my rant of the week #2 where I share my grievances with you and confess about whatever issue is bugging me. Today I’m talking about the most fun topic *NOT* in romancelandia ‘Cheating’. This is one of the behaviour that results in grovelling, actually what this needs is not to be in romance books….

According to the oxford dictionary: Cheat –VERB

I’ve noticed that romance readers have different limits to what they would accept and what they don’t accept as cheating. Some readers consider it cheating no matter that the Hero/heroine didn’t go through the physical act, the thought of it (mental cheating as it is) is enough to put them off. Other’s are fine with it as along as the H/h doesn’t have sex with the other person and then there are some who are more open to it and accept it and forgive the H/h if it happens. I have also seen reader not read the book because even though the H/h had broken up, they had been with someone else and they can’t even read those books because to them its cheating.

I’ve also seen readers just abandon books as soon as any of what they consider cheating happens while others would still read the book albeit the enjoyment of the book would be reduced greatly.

When I first started reading romance, even a hint of cheating put me off and I could feel my soul leaving my body and I pretty much wished the H/h to rot in hell. The thing is, people read romance to escape reality (myself included) why would I want my H/h to cheat on each other and as the saying goes “once a cheater, always a cheater”. I really couldn’t get past that for years, I’m bit better at accepting it now (I don’t know what that says about me) though not by much. By which I mostly mean I understand that cheating happens but I still don’t understand why it has to happen in fictional world as well.

It truly is one of my most hated pet peeves because it just makes me feel icky and really doubt the couple, their HEA and their love. Which isn’t something I want to do. It also makes me particularly hateful towards whichever H/h did it because I just feel that their significant other deserved so much better. The only exception from the books where the Hero cheated and I still ended up enjoying the book and the couple was The Duchess Scandal by Sarah MacLean, I still haven’t forgiven him but I understood his mindset. All the rest I have read I really ended up hating including The Outlander. That book makes you question what you accept because technically she’s cheating but not since some readers say it’s the past and the husband isn’t even born yet….that book was mind boggling.

Unless the whole premise of the book is based on the H/h assumption that their significant other cheated but they didn’t in reality. I’d rather not have it, it’s sometimes taken too far and I’m just left with disgust towards the H/h and it’s not something you want to feel after reading romance. I want to feel blissful!!!

I can accept the H/h being other people after they have broken up but if they are married and just separated it again I feel icky especially if they keep claiming to love their significant other. I’m one of those people that hates love triangles and H/h dating other people dating while dating each other. I have grown to accept the non-exclusive part in modern books but it bugs so much especially if theres genuine feelings sexual or otherwise for the other person by H/h. I do wish books came with warning so either I spare myself from feeling crappy or I can at least be prepared for even the inevitable cheating happens.

This whole post was rather disjoined but it’s a topic that makes me angry and I don’t even know how to properly articulate my feelings on it.

I would really prefer if books didn’t include cheating from the H/h in books, it just isn’t something that’s enjoyable to me as a reader. It doesn’t appeal at all. Sure it adds the element of forbidden-ness for some readers but for me it just leaves a bad taste in the mouth. It’s just there’s so many other ways that could be used to create angst and conflicts to separate the couple so why does has to be cheating??? I’m sure authors are more than creative enough to come up with something that’s better because cheating is something that’s very common in the real world and I don’t want it to be a part of my fictional feel good escape as well.

I didn’t touch about how cheating makes the significant other feel because it makes me more mad because how can you claim to love someone and hurt them so much….and then they have to accept that or forgive that…its just too much….I’d rather H/h end up someone else in that case.