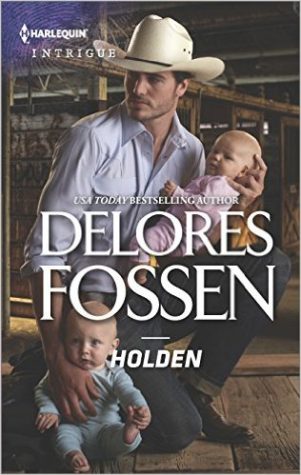 When a baby goes mising, a Texas marshal and a woman from his past discover there's a whole lot more behind this kidnapping...

Holden Ryland certainly didn't become a marshal just to end up busting his ex, Nicky Hart, for taking files from Conceptions Fertility Clinic. But only Nicky knows just what was really stolen: a newborn being held for ransom. A newborn who is kin to both her and Holden. The missing boy is only the start of a mystery that snakes through Texas, winding its way through their families. Bad blood may linger between them, but Holden can protect his nephew back at the Silver Creek Ranch. If they can lay their past to rest to rescue this child, is it possible for them to have a future together?

This was my first book by Delores Fossen, I have read quite a few of romantic suspense from the Harlequin intrigue line but hadn’t yet had the pleasure to read Delores Fossens books.

Nikcy Hart is an investigative reporter and her current assignment has landed her in dark and dangerous waters. While looking into the disappearance of an senator, Nicky ends up finding out that the fertility clinic where her late sister and her husband were clients, had not only implanted her sister’s embryo into a surrogate but that she now has a nephew who is being held for ransom to be sold for millions.

Holden Ryland is a federal marshal, while getting his ex-girlfriend out of trouble isn’t a part of his job finding out that he might have a nephew if he is to believe what Nicky is saying. His nephew is the only thing left of his brother and Holden is willing to do whatever even be in the presence of his ex who almost got his brother killed to get his nephew.

Finding their nephew is just the tip of the iceberg! I did enjoy the suspense and finding out who actually was responsible. The story had interesting protagonists, quite a few of secondary characters and an gripping plot to make it a worthwhile read. The fast paced action/adventure of the book was also done well.

Quibbles: I only wished that the romance hadn’t felt as rushed as it did, we never found how exactly the broke up or any flashbacks of how they met or how their relationship was except their love life.  Maybe if the pace of the book was a bit slower because while the fast pace was good for the suspense plot, it didn’t give me enough time to connect with them as a couple.

USA Today bestselling author, Delores Fossen, has sold over 70 novels with millions of copies of her books in print worldwide. She’s received the Booksellers’ Best Award, the Romantic Times Reviewers’ Choice Award and was a finalist for the prestigious Rita ®. In addition, she’s had nearly a hundred short stories and articles published in national magazines.

Q&A and Giveaway: Branded As Trouble by Delores Fossen