Sometimes your life is split by a single decision.

I’ve spent every day of the last seven years regretting mine: he left, and I didn’t follow. A thousand letters went unanswered, my words like petals in the wind, spinning away into nothing, taking me with them.

But now he’s back.

I barely recognize the man he’s become, but I can still see a glimmer of the boy who asked me to be his forever, the boy I walked away from when I was young and afraid.

Maybe if he’d come home under better circumstances, he could speak to me without anger in his voice. Maybe if I’d said yes all those years ago, he’d look at me without the weight of rejection in his eyes. Maybe if things were different, we would have had a chance.

One regretted decision sent him away. One painful journey brought him back to me. I only wish I could keep him.

Wow. That was an utterly beautiful end to a heart breaking story.

A Thousand Letters begins with a lot of sadness. There has been a loss of love for both Elliot and Wade who were once together through their last two years of high school. Wade decided he wants to enrol into the Army because of what happened to his mother. ( I’m not saying what 😛 ) He asks Elliot to marry him and go with him but, she is extremely young. Being only seventeen she doesn’t have much hope of creating a comfortable lifestyle for the both of them. Or so her father tells her the day she tells him the big news. And so they engagement ends.

And in the end, it was over, his anger sending the shrapnel of his pain into my heart, shredding it to ribbons.” ~ Elliot

For seven years there is a lot of regret. They go separate ways and there are a lot of things that have been left unsaid between them . Well… technically there are A Thousand Letters with a heck load of unsaid words. Yet, Wade is at war and Elliot is living at home with her evil sister and her sweet husband and children.

The story takes off when Wade and Elliot meet again as Wade’s father is sick. And the pain they both go through as they watch their father figure lose his health is painful, all the while they cope alone in the same house.  But this story does have a happy ending, it just takes a long time to get there. A really frustratingly long time.

Elliot Kelly. She is one of the most selfless characters I have read about. She is all about love. However, for a long time because of her love, she is also somewhat a ‘doormat’. For a long time, she lets people say horrible things about her whilst she gives her time to these people. Case in fact, her evil sister Mary. You’ll hate Mary from the beginning. She is selfish, rude and everything Elliot isn’t. Mary takes Elliot for granted, making her raise her children to pay her rent. I mean you can see why Elliot doesn’t complain, but what her sister says to her is uncalled for, yet she takes it. Her family treats her horribly but the Winters family never did. They let her fly so to speak. She found herself and her confidence with them.

“ You excuse everyone for treating you the way they do, did you know that? “

A defensive wind blew inside of me. “ Because there are reasons, valid reason, and I’m not so self-important as to think I’m above their feelings.”

“But what about your feelings?”

He clenched his aw, his voice hard. “ But they treat you like you’re not important at all. “

“That’s not entirely true. But I don’t need their validation.”

One thing that Staci Hart does really well is to show the growth of Elliot. She really changes, finding her backbone and standing up for herself after lots of heartbreak created by Wade. Wade was a real douche several  times throughout this book. It was sad to see sweet Elliot hurt so much because she loved so hard. But she gets her happily every after once she learns to stick up for herself.

“Braveness isn’t always loud. Sometimes it’s silent. There’s braveness in sacrifice and kindness. It’s in doing a thing that needs to be done, even though it’s hard, and even though it hurts.” ~ Elliot

Wade Winters. Our hero Wade, is a hero in war. For seven years he fought for his country and he is back in his hometown for his father. Wade has been scarred by war though, it changes the way he can express his love.

“Life inside of war is no life at all. It shrinks your world down to a thirty-mile radius, and everyone in that radius is living the same hell. There’s a comfort in that. But there’s also hear, dear that you’ll never live that normal life again.” ~ Wade

For how much Wade fights, he can’t seem to stop himself from running away from love. When things get too hard for him he runs and it is a continuous pattern seen in the book till about 90% of the way. It is frustrating, but your heart will understand his reasons and sympathise. He isn’t a bad guy. Wade loves hard. He just loses his focus. An Aspect of the book that was very well done, was the amount of responsibility Wade took upon himself. He is a good brother though sometimes he makes the wrong decisions. Take a read, on what not to do to your siblings: P

“My regret was infinite. And that regret had made me lonely. Angry. It had changed me, twisted me into the man I was now. And now… now it was impossible to see a way back.” ~ Wade

But in the end, their love is a beautiful one. I won’t lie. I shed a few tears through some haunting scenes. This book touches you in the way, where you can imagine some of the scenes happening in your life. I did. I don’t want to spoil it, but hopefully you feel that. The epilogue is fantastic. A great way to end this story, I really loved the setting of the epilogue. It’s a dream of mine. Read to find out 😛

This book is a really nice read and there are some fantastic lesson to be learnt from this book. Take a read!! 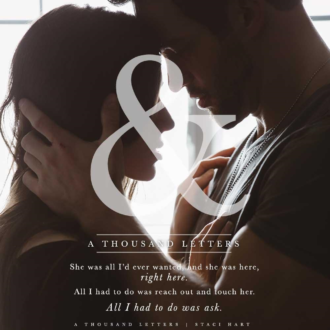 Staci has been a lot of things up to this point in her life:

a graphic designer, an entrepreneur, a seamstress, a clothing and handbag designer, a waitress. Can’t forget that. She’s also been a mom, with three little girls who are sure to grow up to break a number of hearts. She’s been a wife, even though she’s certainly not the cleanest, or the best cook. She’s also super, duper fun at a party, especially if she’s been drinking whiskey. Her favorite word starts with f and ends with k.

From roots in Houston, to a seven year stint in Southern California, Staci and her family ended up settling somewhere in between and equally north, in Denver. They are new enough that snow is still magical. When she’s not writing, she’s sleeping, cleaning, or designing graphics.