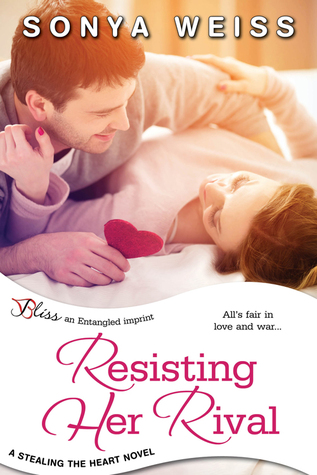 All’s fair in love and war…

Abby Snyder finally has the opportunity to expand her diner now that the building next door is available. Unfortunately, she must compete with Nick Coleman to get it. Abby—usually über-responsible—shared one night of intense passion with the playboy, and she’s been trying to forget it ever since. But then Nick bets her the building that he can make her fall in love with him in thirty days.

With his reputation ruining his chances at gaining some big clients, Nick needs a way to prove to everyone that he’s reformed. Dating Abby, the most respected girl in town—and the only one he wants—is the perfect solution. Nick’s confident he’ll get Abby to fall for him, so he’ll win the building and the girl he can’t get out of his mind.

But even though Abby can’t lose, resisting Nick is harder than she thought.

Buy the book on Amazon: Resisting Her Rival (Entangled Bliss) (Stealing the Heart)

ARC generously provided by Entangled publishing in exchange for an honest review.

Abby Synder has a been a care taker her entire life, ever since her parents died and she had to take care of her sisters. She is very responsible, independent and determined to get the building for her diner. She has also since her divorce, closed her heart to any relationships.

Nick Coleman is the man with a bad reputation, he was the bad boy in high school. While he did not care of his reputation as a young adult and was somewhat proud of it, as an adult he dislikes it every time it is mentioned. Nick business is suffering because of his reputation and the prefect solution to him seems dating the good girl in town since gaining her trust will earn him the trust of others.

Abby and Nick had known about each other their entire life since they grew up in the same town. Abby had a crush on Nick in high school but she never told anyone about it or asked Nick out because of his reputation. Nick also noticed Abby during high school but she was always ignored him. Fast forward to the present, Abby and Nick had one night stand when she was visiting Florida to visit one of her sisters. Now some time later, they both want the same building for their business expansion and since the owner being part of their town says them to solve it out on their own, this leads to them becoming rivals. Which leads to Nick betting her that he could make her fall in love with him and him getting the building if he wins.

I enjoyed the banter the hero and heroine had, their romance was sweet. I also liked both Abby and Nick’s family. The few glimpses we get of the upcoming protagonists of the next book in the series were also interesting.

Quibbles: First of all, I don’t know what exactly happened but after reading almost half the book, the book started feeling flat to me. Secondly Abby, god she was pig-headed till the last page really, her unwillingness to see Nick as a changed man and her refusal to face her feelings or trust Nick and see Nick as a man deserving of her love annoyed me. Lastly Nick’s behavior, it was confusing he wanted Abby to fall in love with him but he doesn’t do love, he wanted to use Abby’s reputation to his advantage but he wants her trust. His behavior just rubbed me the wrong way, he gave no thought to the consequences of making someone fall in love or gain their trust for a business deal and the future. Personally, I did not understand the bet I mean why would you want to make someone fall in love with you with no future or regard to anyone’s feelings unless you love them yourself or you want revenge.

I did not read the first book in the series so I can personally say that the book can be read as a stand alone though it is part of the series Stealing the Heart.

Overall it ended up being an ok read. I do think people who like their romance sweet, low on angst and clean would enjoy it a lot more than I did.